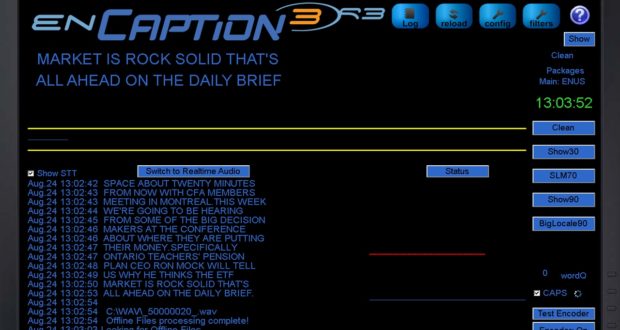 enCaption3R2 system adds support for captioning of pre-recorded content, removing the burden of manual intervention for broadcasters, universities and other media library owners

Southfield, MI, August 25, 2016 – With IBC2016 on the horizon, ENCO will launch the latest version of its enCaption automated closed captioning system in time for the show. Leveraging all the power of its previous-generation enCaption3 system for live speech-to-text conversion, the new enCaption3R2 addresses the underserved market for automated captioning of pre-recorded content.

The enCaption3R2 integrates a new speech engine based on deep neural network acoustic modeling that further improves accuracy, including enhanced representation of voice and punctuation for the hearing-impaired. Additionally, its file-based ingest workflow automates the process of preparing content for captioning. When used in a live environment, captions are delivered as spoken, including accurate presentation of important news and weather bulletins. Additionally, enCaption3R2 addresses the greater challenge of correctly spelling important terms like names and local places through direct verification with news rundowns.

“Many of the inquiries we receive for enCaption have asked whether we can address pre-recorded content captioning,” said Ken Frommert, general manager, ENCO. “A large majority of live captioning is applied for news production, but there remains a significant need for automated solutions to caption other valuable content such as movies, reruns and non-live programming. We’re giving our customers who require this a low-cost method for instant captioning, as opposed to outsourcing it to a company for manual production that takes days; or wasting valuable internal resources on a very tedious and time-consuming project.”

Outside of television, Frommert notes that organizations with large libraries of video content now have an easy-to-use toolset for putting content online – all while remaining in compliance. Since enCaption3R2 is speaker-independent, any subject can begin speaking into the system immediately and produce captions without voice training.

“A university or corporation may have 20,000 videos they want to put online, but cannot serve the hearing-impaired audience without captioning in place,” he said. “The costs and labor of doing that manually are enormous. enCaption3R2 solves the problem of achieving such a goal in a timely and compliant manner.”

enCaption3R2 joins the company’s growing portfolio of software-defined regulatory compliance tools for TV and cable broadcasters, which also includes the recently introduced AIM-100 audio insertion manager for automated text-to-speech conversion. The AIM-100 will receive its international debut at ENCO’s IBC stand (8.A59) alongside the global debut of enCaption3R2. IBC takes place in Amsterdam from September 9-13 at the RAI Convention Center.

About ENCO Founded in 1983, ENCO Systems is a world leader in playout and automation system solutions for demanding radio and television organizations. ENCO is headquartered in Southfield, Michigan USA and retains a worldwide distribution network. For more information, please visit: www.enco.com.