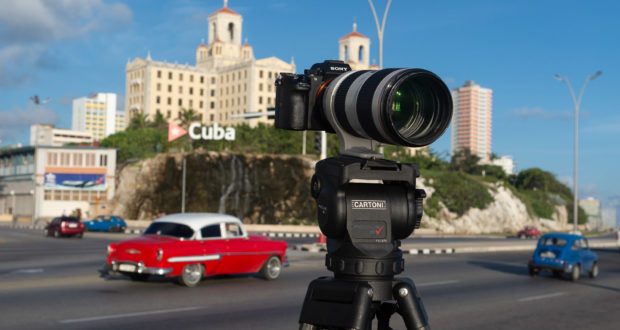 Frank Lozano is on a mission.

“I’ve filmed orphanages in Haiti, AIDs clinics in Nigeria, I have documented digging water wells in Burkina Faso, Africa, and told the heartbreaking story of two married Holocaust survivors that met in a concentration camp,” says Lozano. The imagery he creates is inspiring. Visual storytelling may be the only way to accurately convey what the first drop of clean, accessible drinking water can mean to a people who have never known one.

Frank’s corporate clients include a resort in Cambodia and his photographs have had gallery showings. The documentary filmmaker and veteran photographer has a professional background as diverse as the places he has traveled. Based out of Los Angeles, his projects have taken him all over the world.

“Since most of the organizations don’t have budgets, I use the gear that I own and have a very small footprint. I am currently shooting with the Sony A7III and carry my older Canon 5DMKIII as a backup,” says Frank. For sticks, Frank uses the Cartoni Focus 8, a lightweight tripod with the stability to create his precise time-lapse sequences and provide camera movement that is smooth and natural.

Frank’s own career arc is as unscripted as the many projects he works on. “I used to be “on-air” at Power 106 FM as ‘Lozano on the Loose’ from 1989-2001,” says Frank. “Even though I was a disc jockey, I always had my camera and took pics of the artists that came into the studio, and I have some good ones – Eminem, Mariah, Lionel Ritchie, Carrie Underwood – many of these photos have never been shared publicly.”

But Frank’s love of photography and the moving image began long before he picked up a mic. “I guess you would say I have been shooting since I was in middle school and I have my mom to thank or blame for that,” says Frank. “She always had a 35mm film camera and a Super 8 movie camera around the house and I started telling stories with those tools editing footage with blade and tape.” Recently, a high school classmate posted a photo of Frank back in the day with his 35mm in hand.

And it turns out Frank has a history with Cartoni. “Fifteen years ago when I was giving my time as the media director for a local church, they had two Cartoni tripods and I used them whenever I could,” says Frank.  “Back then, I didn’t have the budget to invest in a Cartoni so I purchased a ton of other tripods and, like most shooters, I have a stack of them in my garage.”

A couple of years ago, Frank finally got a Cartoni from Band Pro in Burbank and after using it the first day, he was sold on it. “With all the money I spent on inferior tripods, I could have purchased several Cartonis,” he says.

Frank’s background in both radio and film has allowed him the opportunity to serve not only his community but people around the world. He has his own nonprofit – GlobalPointMinistries.org. “The projects I am drawn to are varied,” says Frank. “I run my own sound using my Sound Device MixPre6 with four wireless lavs and am looking to convert to all Sony glass and get another Sony camera as the budget warrants.”

The Cartoni will be with him. “If I had just invested sooner, I would have saved myself tons of frustration with shots I didn’t like or could not use because the sticks were cheap,” says Frank. “It is so nice to shoot with a tripod that is solid, steady and reliable.”

“I love giving back,” says Frank and if you look at his amazing body of professional and nonprofit work, you will quickly see that is not a cliché. Check out his website, lozanoproductions.com and on social media at @franklozano. Frank jokingly says, “I have helped out so many non-profits, I’m the only one who is not profiting.” Frank laughs and continues by saying “But it’s that same spirit that has taken me to some pretty cool locations to tell stories that needed to be told. That’s my mission”.

Manios Digital is the exclusive US distributor for Cartoni Camera Supports.