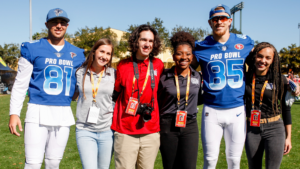 High School Nation was founded in 2014 by Jimmy and Mike Cantillon when their efforts to help their younger sibling’s band find a place to perform evolved into a nationwide effort to support schools and young artists. “High School Nation set a goal early on to show teens there are thousands of unique career paths out there,” said Jimmy Cantillon. “We believe that once a student has had a taste of a career in a creative field, it can send them down a whole new path in life.”

Cantillon and his team have a unique ability to gain access for their students to what many see as the impossible; the group regularly takes student broadcasters to such illustrious events as the NFL Pro Bowl, NBA Summer League, MLB All-Star Week and more. But their beginnings were much simpler. At the start, HSN focused on radio broadcast by encouraging young, up and coming musical artists to stop by high school radio stations for an interview. Often this was followed by an on campus performance during lunch. From there, it seemed a logical extension to move into digital production.

HSN Videographer Ryan Slattery welcomed the upgrade to the Blackmagic URSA Mini Pro 4.6K, simply because it gave them professional options. “The footage quality is amazing. After shooting S-Log 3 for years, we found codec transition relatively smooth, but the 10-bit color depth is an important improvement. As a package, the URSA Mini Pro did give us an easier set up, by already having a monitor (with LUTS), having the XLR inputs, and the built in shoulder mount already in place,” said Slattery.

HSN’s first experience with the cameras was at the NFL Pro Bowl, and quickly Slattery found the practical flexibility of the cameras a great value. “They allowed us to shoot 60 fps at UHD, which is a huge improvement from our previous cameras which needed to be brought down to 1080 to capture 60fps. Another great improvement was the ability to plug XLR microphone cords directly into camera, rather into a separate audio recorder. The shoulder mount approach made sense in this application, rather than going with a monopod or stabilizer. Lastly, the color depth is incredible.”

Moving from DSLR technology into an URSA Mini Pro was a leap, but one that was welcome by HSN and the students, who had the opportunity to put the systems together and experience the setup as they prepared for their interviews. “They all commented, including the teachers, on how much better their on campus departments would be if they had access to gear like this,” said Cantillon. “They were blown away.”

High School Nation hopes to continue expand their programs, and intends to push further into digital production. “As more schools are wanting to introduce digital media, production classes and labs on campus, we saw an opportunity to play a role in helping make that a possibility for public schools nationwide,” said Cantillon. “We want to help schools start classes and eventually full departments that focus on these careers. We want to help them set themselves up for life after high school, and head off to college or careers with as much familiarity with new technologies and gear as someone who is in their mid late 20’s. Our goal is to start granting schools major production studios that their entire district can use for creating anything they can think up!”

But ultimately, HSN will always focus on giving back to the students, and providing experiences early on that might lead them into a positive career they love. The access to not only Blackmagic Design technology but also major athletes and performers is unique, but just like everything else, comes with a learning curve.

Product photos of URSA Mini Pro and all other Blackmagic Design products are available at www.blackmagicdesign.com/media/images.