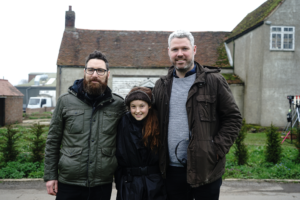 Fremont, CA – May 20th, 2019 – Blackmagic Design has today announced that “Zero,” a new science fiction short from acclaimed British writer director duo The Brothers Lynch, was shot on the URSA Mini Pro. Starring Game of Throne’s Bella Ramsey, “Zero” has premiered in New York as part of this year’s Tribeca Film Festival lineup and will have a European release at SciFi London.

Opting to reflect the post apocalyptic themes of the film through its camerawork, Keith and David Lynch collaborated with cinematographer Adam Etherington whose credits include “Gwen,” and “Poldark.”

“The URSA Mini Pro was the ideal choice,” says David. “Even on an indie budget, it meant we were able to to get the most out of our footage by shooting in raw. We had a lot of visual effects shots due to the nature of the genre, and shooting at the cameras full resolution allowed us to master them in 10 bit DPX for greater flexibility and accuracy in post production.”

According to Adam, the URSA Mini Pro’s lightweight form factor enabled the team to meet the shooting demands of Zero’s unique set. “The short was mostly shot in this beautifully decrepit old house, which acts as both a haven and a prison to the characters,” he explains.

“We had initially discussed the film playing entirely on sliders and dollies, however moving around the house was prohibitive. Instead, we choose to shoot significant portions off the shoulder. We opted for a set of MK2 Zeiss Superspeeds which gave us a good range of focal lengths. At T1.3, the glass was nice and fast and gave us a much softer image that was more in keeping with our desire for the audience to feel close to the lead character.”

The team also primarily worked with a small package of 2.5k and 4k daylight HMI sources dotted around the exterior of the location. This was partly a creative choice, and also designed to play to the strengths of the camera’s sensor, based upon what they’d learned through testing.

“As we were shooting handheld, it was important to give the directors plenty of freedom to move without a great deal of relighting,” Adam continues. “We decided to diffuse the exterior of the windows and play the sources directly. This created a strong directional light and allowed the crew and cast freedom to move, while enhancing the sense of claustrophobia by eliminating the outside world from view.

We really pushed the URSA Mini Pro to its limits. Its latitude and dynamic range allowed us to exploit the fact we’d get a swift roll off in the highlights to hide the exterior world. We then also had the creative freedom to use negative fill within the space to wrap and shape the light.”

Sky as part of the DUST SciFi channel, the short is now being developed by the brothers into its own feature length film.

Product photos of Blackmagic URSA Mini Pro and all other Blackmagic Design products are available at www.blackmagicdesign.com/media/images.