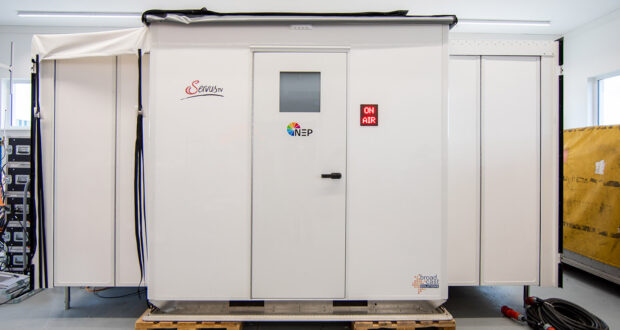 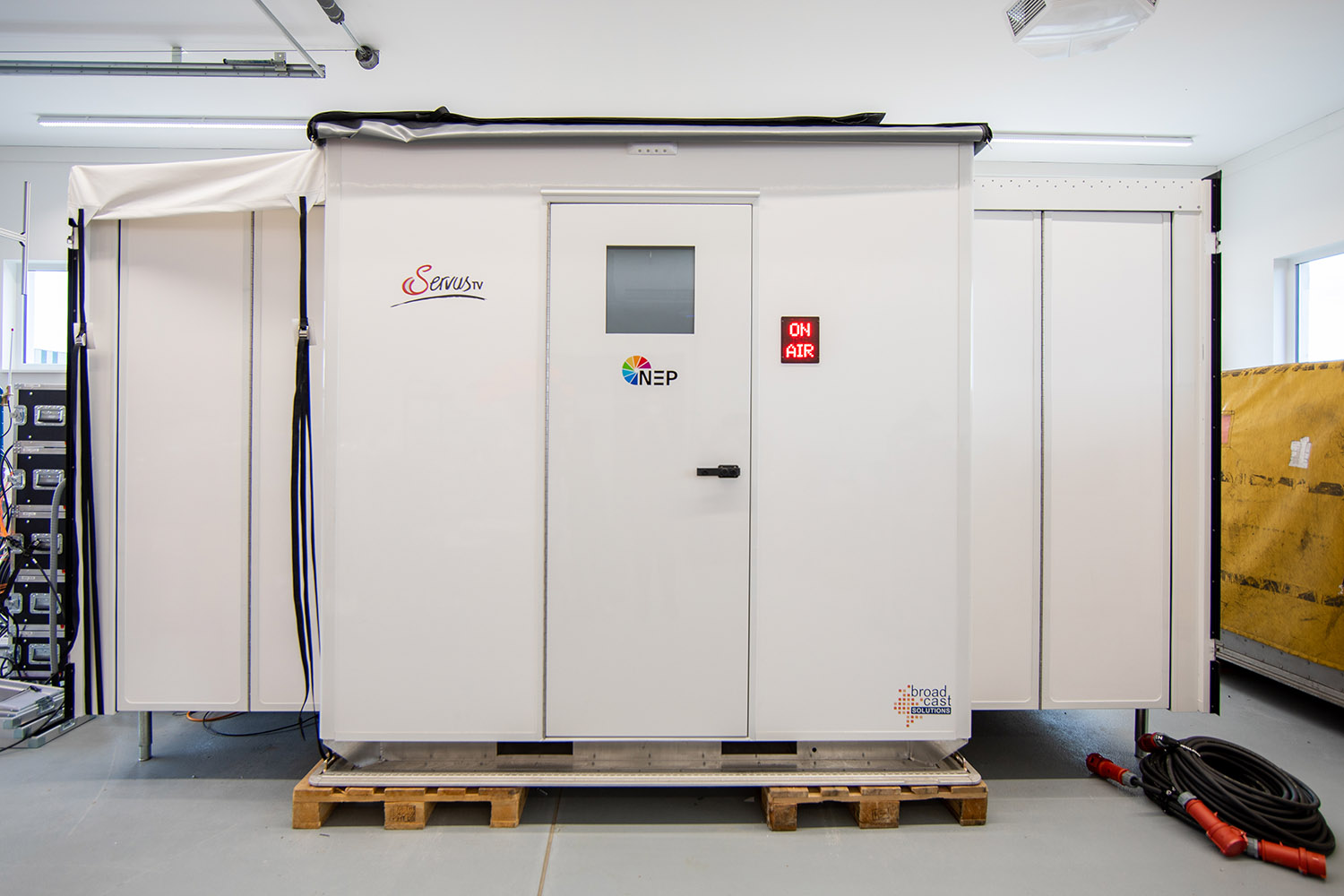 Producing the Formula 1 for TV is, besides the production challenges as such, a logistical tour de force. Production equipment needs to travel around the world preceding the racing circus and must always be on-site and ready for use at the right time. To have an optimal and quickly operational solution at the race tracks, NEP Germany relies on a new container solution to transmit signals from the pit lane and for interviews alike. From this season onwards, broadcaster Servus TV acquired the rights to broadcast Formula 1, and NEP Germany is acting as a production service provider to the Austrian network. The new container solution is a mobile production studio, installed in an extendable air freight container that NEP developed together with Broadcast Solutions. Interacting with additional air freight containers that function as “set-up vehicles”, so to speak, they travel around the world during the Formula 1 season.

This POD, which is housed in an air freight container equipped with extensions, is primarily used to produce interviews and expert talks, which are captured by two wireless camera teams and 1x EB team around the track or in the pit lane. In the smallest possible space, it accommodates all the essential technical components used for a TV production, known from an OB van.

Mark Overkamp, Technical Director at NEP Germany, explains the background of the development: “Because of the excessive travelling involved in the production of Formula 1, we needed a highly mobile, transportable solution that could provide all the technology for our productions in the smallest possible space and still make it comfortable to work in. Together with Broadcast Solutions, with the POD, we have developed a solution that, in combination with a sophisticated stagebox concept, optimally supports us in the current productions but also leaves options open for the future.” 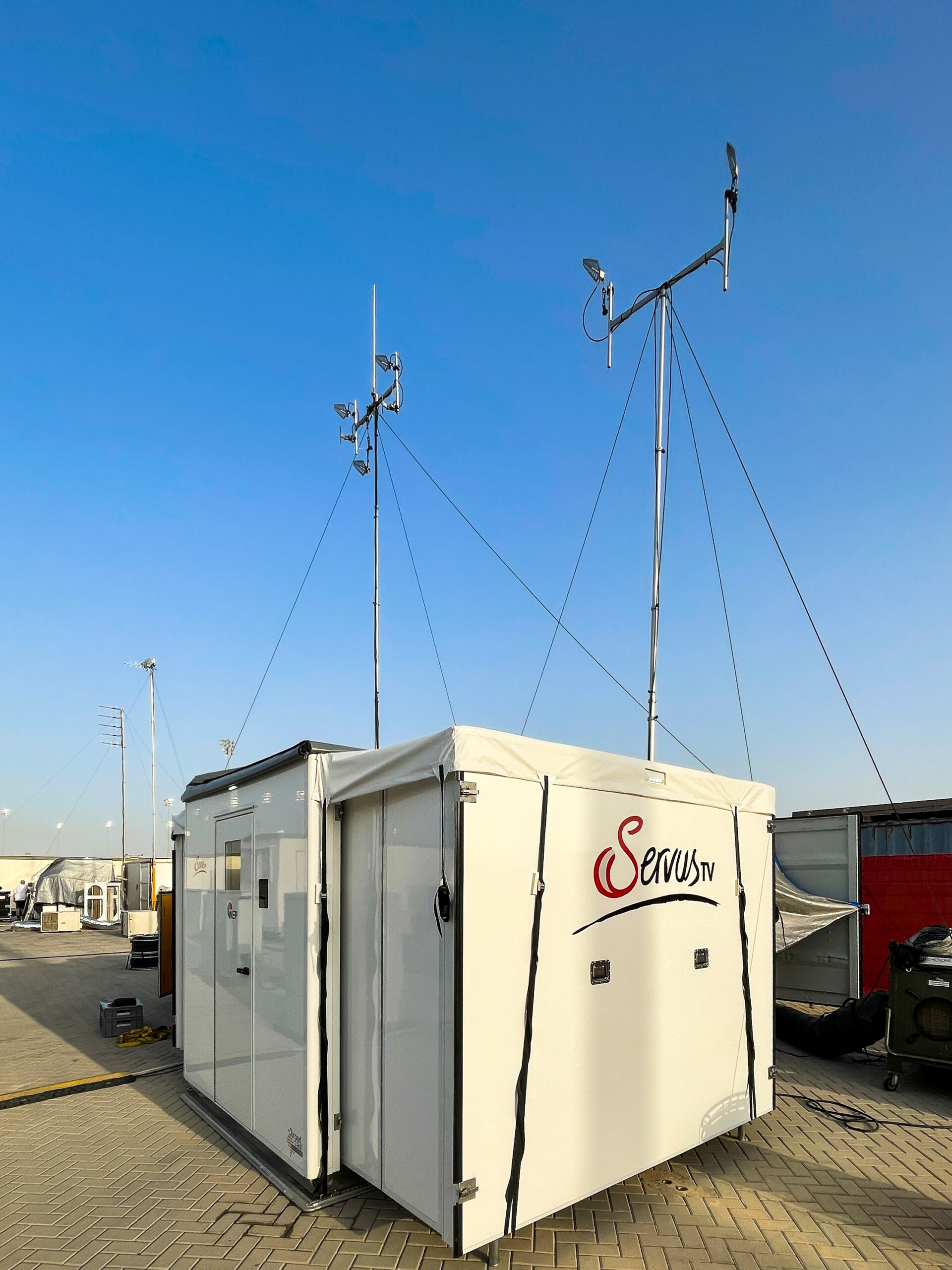 With two extensions, the POD can be enlarged from 7.5 m2 to 14m2 and offers space for four (4) workstations (1x audio engineer, 1x video engineer, 2x editorial staff), including a central technical rack with 2x 38 RU. The POD is used to monitor the video and audio signals of the camera teams working on the production, as well as to control the intercom signals and the Motorola radio links. During the productions, the audio and video signals are transmitted directly from the race track via dark fibre to the Servus TV broadcasting centre in Salzburg, where the PGM signal is being created. The in-ear monitoring of the presenters, reporters and camera teams is managed in the POD to avoid audio delays.

The audio signals generated in this workflow are characterised by high heterogeneity: The POD and the WISYCOM transmitters, which realise the wireless network across the track work with digital audio in the Dante format. The intercom signals are processed in AES67, and further analogue audio signals are coming from the Office Containers. To ensure smooth conversion, several PRODIGY multi-format converters from DirectOut, housed in stageboxes, convert analogue audio and AES67 to Dante and vice versa. A YAMAHA QL1 digital audio console with DANTE integration is used to mix the signals in the POD itself. In the POD, Riedel’s MicroN system works as the main router. For control of the audio and video signals, the Broadcast Solutions control system hi human interface runs in the POD.

Technically and in terms of workflows, the POD is designed to be ready for full remote control from the broadcasting centre in Salzburg. The system already passed its first baptism of fire on 28 March at the Bahrain Grand Prix. The next event will be the Italian Grand Prix in Imola on 18 April.