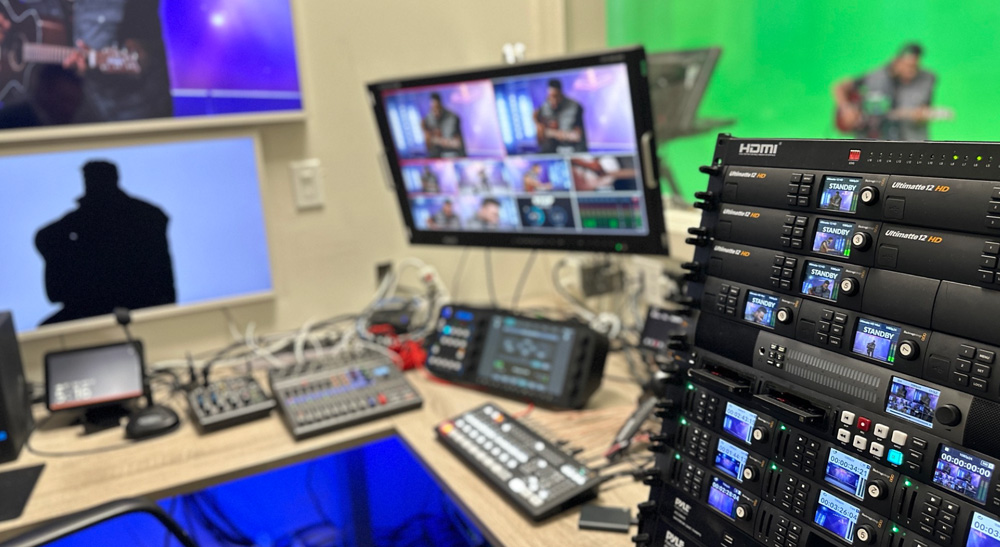 While Kolrom Multimedia provides pre through post production services for films, documentaries, educational videos, commercials and more, its green screen studios have become a destination for hosting multicam virtual events and live streams, including talk shows, telethons and lectures, as well as for virtual production, music videos and VFX work.

“The majority of our clientele are nonprofits looking for cost effective ways to promote their programs, messaging and fundraising,” explained CJ Kramer, owner, Kolrom Multimedia. “With the new Ultimatte 12 models becoming so affordable, it has been huge not only for us, but also our clients as we can provide top notch green screen services without having to up our prices.”

“We had been longing for Ultimatte for some time, and now with the new extremely affordable models, we have one for each camera,” Kramer added. “The fact that the key is cleaner and handles the imperfections of things like hair and edges better make all the sets feel more organic and realistic. It also allows us to focus on the other aspects of the production and spend less time fighting with the key.”

While Kramer and his team also use the Ultimatte Smart Remote 4 and appreciate its touch screen and physical knobs, according to Kramer, the new Ultimatte Software Control app also comes in handy when bringing in media as it’s already on the PC that houses the virtual set files. “We love how we can bounce back and forth between the two seamlessly,” he said.

“While the ATEM Mini models made live streaming and green screen based live production even more accessible, the new Ultimatte 12 models are a game changer when it comes to professional, broadcast grade keying of live virtual environments,” concluded Kramer. “Not only is virtual production no longer just for Hollywood, but tools like Ultimatte are bridging the gap between film and live production. It’s one tool that allows us to do so much.”