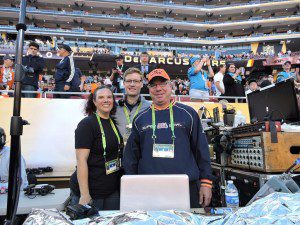 With an anticipated 111 million viewers from all over the world, James Stoffo, PWS RF lead, and Jim Van Winkle, PWS general manager, collaborated with ATK Audiotek’s Paul Liszewski and Versacom’s Matt Campisi in late Fall to begin preparations for the big game. Van Winkle and Stoffo visited Santa Clara to conduct a site survey at Levi’s Stadium and surrounding areas in order to prepare an initial list of required frequencies. After the visit, PWS provided their list of frequency requirements to Karl Voss, who handled the frequency coordination for the entire event, including coaches’ intercoms, referee mics, network broadcasters, media and entertainment. Once Voss gathered all the frequency requests, he assigned PWS the frequencies needed to integrate the entertainment portions of the Super Bowl.

The Super Bowl presents its own unique set of challenges, mainly due to the size and scope of the event. This year, PWS handled frequencies for Lady Gaga who sang the National Anthem, as well as all of the microphones for the halftime show, which featured Coldplay, Bruno Mars and Beyoncé. In addition, PWS managed fourteen in-ear monitor channels with 90 receivers being deployed for the halftime show. PWS was also tasked with overseeing the frequencies for each of the referee mics. 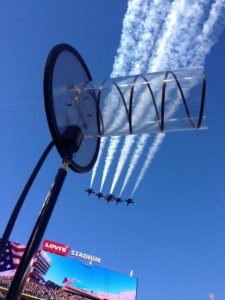 For the second year in a row, the team utilized 24 Radio Active Designs UV-1G VHF Narrow Band Beltpacks, which made frequency management easier than previous years. By using the UV-1G systems, there is more space in the UHF band for other wireless users to operate in. PWS provided a Shure Axient wireless system and managed Shure UHF-Rs and PSM1000’s from ATK. Sennheiser provided a Digital 9000 system for Beyoncé.

“From an RF engineering standpoint, this was the most difficult Super Bowl ever,” says Stoffo. “Due to the sheer number of frequencies on the field, the NFL was forced to place us closer to each other than some of the wireless equipment is designed to tolerate. This is why we hedge our bets by remoting transmitter and receiver antennas onto the field to minimize the distance from the performers. Four RF technicians manually handled four helical antennas for wireless in-ear monitor transmitters and microphone receivers, pointing them like spotlights at the action on stage. Three in-ear monitor transmitter antennas were used for Beyoncé, Bruno Mars and Coldplay so that they could be positioned perfectly.”

Besides physically handling the antennas on the field, the PWS team was busy overseeing more than 90 of the 1,000 frequencies being used to guarantee that spectrum users were not interfering with one another during the Super Bowl’s entertainment segments.

“The Super Bowl is an event of epic proportions and the PWS team of Stoffo, Deb Munini and Cameron Stuckey did a spectacular job in keeping all of the frequency management running smoothly,” adds Van Winkle. “With the help of Karl Voss, ATK and the Versacom crew, all of whom were great to work with again, any potential problems were quickly recognized and resolved and the game and related entertainment segments went off without any issues.”