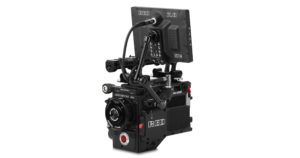 RED’s Post Production and Workflow Specialist, Dan Duran, will be presenting at the inaugural 8K Seminar on April 10 in Room N221-222 at 11:05 a.m. Duran will share the benefits of 8K from acquisition to post, followed by a panel discussion with moderator and organizer Chris Chinnock. At Adorama (Booth C4446) on April 8 at 4pm, Duran will discuss the value and benefits of REDCODE RAW with Cinematographer, Kaity Williams, and host, Steven Pierce. Duran will also discuss new post technologies with Cinematographers Philip Grossman and Phil Holland on April 9 at 2:30pm at NAB Live Stage (located between Central and North Halls).

Visitors to the RED Demo Room will experience real-time playback, edit and color grade of 8K footage by offloading the compute-intensive decoding and debayering of R3D files onto one or more NVIDIA GPUs.

RED will also provide live demonstrations of its latest sensor technology at NAB, including the MONSTRO® 8K VV and GEMINI® 5K S35. The DSMC2 MONSTRO delivers the most comprehensive lens compatibility in the industry and users can nimbly transition from 8K Full Frame to 6K Super 35, and down to 4K by simply changing their resolution. The DSMC2 GEMINI leverages dual sensitivity modes to provide greater flexibility for a variety of shooting environments including exceptional low-light performance. Recent productions that have chosen these sensors to tell their stories include “Mindhunter” (season 2), “Bosch,” “The Dirt,” “The Witcher,” “The Village,” “Sneaky Pete” (season 3), “Peaky Blinders” (season 5), “Now Apocalypse,” and “Tidelands,” as well as the upcoming “Stranger Things” (season 3), “6 Underground,” “Maleficent: Mistress of Evil,” “The Aeronauts,” “A Million Little Pieces,” and “Sextuplets.”

Joining the NAB product presentations are RED’s newest accessories. The RED® DSMC2 Touch 7.0” Ultra-Brite LCD Monitor is a robust, optically-bonded touchscreen with Gorilla® Glass that provides an intuitive way to navigate menus, adjust camera parameters, and review .R3D clips directly out of the camera. It offers a brighter, high-definition viewing experience for recording and viewing footage on DSMC2 camera systems, even in direct sunlight. The DSMC2 PRODUCTION MODULE mounts directly to the DSMC2 camera body and incorporates an industry standard V-Lock mount with integrated battery mount (DSMC2® Gold Mount will be available soon) and P-Tap for 12V accessories. The module delivers a comprehensive array of video, XLR audio, power, and communication connections, including support for 3-pin 24V accessories. It’s also available as a kit.