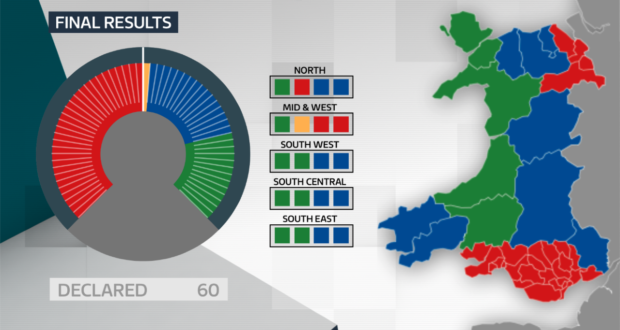 Singular.live, the pioneer of revolutionary cloud-based technology for live graphic overlays, today announced another record, as it became the first cloud-based graphics platform to be used by ITV.

Singular powered the graphics for ITV Wales’ coverage of the Welsh Assembly elections last May. Live election broadcasts require fast, accurate and up-to-date data. For the 2021 Welsh Assembly elections, ITV Wales used a new Singular feature – Data Streams – which is purpose built for high frequency, high volume and low latency data. Data Streams with JS Data Nodes, created by the ITV team in Singular, enabled live election data to be delivered in JSON format, for immediate display as graphics.  As a consequence the majority of the overlays were automatically updated; which was one less thing for the production team to consider.

The ITV team used SVG maps of the region to display how the electorate voted – a key visualisation in any election coverage. ITV Wales were able to manipulate these maps using composition scripts within Singular. This allowed ITV Wales to isolate any area within the map with the latest relevant data. This data was constantly and automatically updated through the Data Stream workflow. This was possible because of Singular’s powerful Composition Scripts. These enable the addition of powerful, fully customisable, control through JavaScript layers from directly within the Singular Composition without using the Graphics SDK or any external hosting.

For previous election broadcasts, ITV Wales  had used desktop applications  with web interfaces for data entry, and graphics control being spread over several applications developed in C#. These applications were difficult to deploy and update quickly.  ITV Wales had been introduced to Singular through a previous IBC Innovation Accelerator collaboration. After this project, and some extensive testing, ITV Wales chose Singular as the graphics provider for ITV Wales’ election coverage.

“The building, linking and updating of the custom overlays worked with ease, allowing for a more time-efficient and stress-free production,” comments Keith Jones, Technical Support Engineer, ITV Wales.  “Overlay composition build and data delivery was much easier than using traditional systems. Being an HTML5, cloud-based, solution, Singular provided easy access to the graphics wherever they needed to be seen.”

“Three of the main benefits Singular drives are its ease of use, efficiency and flexibility,” says Andrew Heimbold, CEO of Singular.live. “These have shone through in the exciting results of this project. It is fantastic to see Singular used for the very first time by ITV, amid a very high profile event. This is a great vote of confidence by a major broadcaster and we are very happy the platform was able to deliver peace of mind for this election broadcast to the ITV Wales team”.