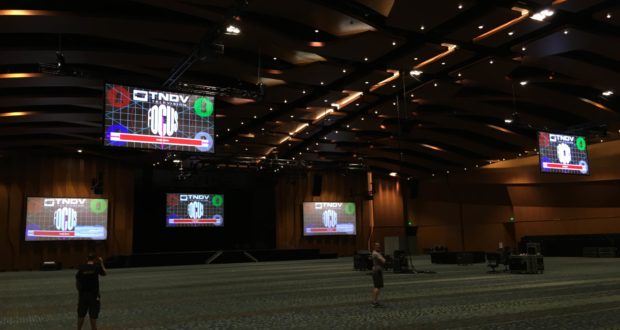 NASHVILLE, October 18, 2016 — One of the first projects for mobile production specialist TNDV’s recently-launched Exclamation truck was also one of the company’s biggest shows logistically in its 13-year history, as it provided turnkey services for General Assembly 2016 (“GA16”), the flagship event of Cleveland, Tennessee-headquartered Church of God. TNDV managed all elements including video, audio, lighting, staging and crews for the 22-camera production, which spanned four locations spread across two floors of the Music City Center in Nashville. Combining leadership meetings, elections and educational sessions with worship services, musical performances and special events, the biennial General Assembly is a crucial gathering for the Church of God, shaping the direction and future activities of the church and its followers. Held over four days, GA16 was Nashville’s first hosting of the event, and the first time it encompassed multiple environments. Daytime meetings and sessions were held in the center’s massive, fourth-floor Grand Ballroom, while a worship space built across two of the facility’s downstairs exhibit halls seated over 20,000 attendees in the evenings.

“The separate locations required very distinct atmospheres,” said Chad Gurney, coordinator of media for Church of God. “TNDV designed the worship experience to be immersive and entertaining, energizing participants after the more formal tone of the meetings and sessions upstairs.” The stage design for the worship space posed one of the project’s first challenges, with the exhibit halls’ large supporting columns threatening to significantly impede visibility. TNDV came up with a creative ‘services in the round’ design that put the column in the center of the stage and wrapped it in LED displays showing motion graphics, image magnification and video playback, avoiding visual obstruction while turning the column into an engaging production element.

In addition to the two primary venues, GA16 also featured anchor-desk style sets on each floor for interviews with leaders, attendees and sponsors. All four locations were connected to and controlled from TNDV’s 53-foot, double-expando Exclamation truck, which was parked inside the facility, backstage of the worship area. “Exclamation was ideal for GA16’s requirements and scale,” explained TNDV President and Owner Nic Dugger. “Rather than sending two separate trucks, we saved the Church of God money by using a single production control space in the building. And even when late schedule changes required us to produce shows in both main areas simultaneously, the technical capacity, capabilities and sheer size of Exclamation allowed us to do that easily.” To link Exclamation to the cameras and other production equipment across the immense complex and overcome limitations of the building’s built-in cabling, TNDV installed its own temporary fiber infrastructure on-site. While the cameras covering the worship environment were close enough for SMPTE hybrid fiber connectivity, MultiDyne SMPTE-HUT fiber transceivers enabled single-mode fiber transport of video, tally signals, camera intercom and more between Exclamation and the additional cameras thousands of feet away. TNDV similarly used a combination of RTS intercom solutions and Studer Stagebox units from HARMAN Professional Solutions to transmit and receive both intercom communications and more than 100 total channels of production audio.

“It was a very significant infrastructure we had to build, but the versatile gear in Exclamation’s toolbox enabled us to seamlessly interface all four production locations to the truck,” said Dugger. “For example, from the upstairs meeting venue, all of our connectivity – every camera, projector, audio and intercom feed – travelled over one Tactical fiber cable to the truck.“

While Exclamation, the equipment and the infrastructure performed flawlessly during GA16, it was the trust and close working relationship between TNDV and its counterparts at the Church of God that enabled the production’s success.

“GA16 was the largest production endeavor for the Church of God in their more than 100-year history, and we were honored that they placed their trust in us to realize their vision for the event,” concluded Dugger. “This is a great example of what a client-vendor relationship should be, working hand-in-hand as a team to meet their objectives. We’re proud that the results met both their goals and their budget, and look forward to the opportunity to working with them again.”

ABOUT TNDV: Television
Formed in 2004, TNDV: Television represents the culmination of over 22 years of broadcast and live production for Nic Dugger, owner and president; and his staff of full time engineers. TNDV produces events from small single-camera productions all the way up to multi-million dollar international TV events, and takes pride in building custom solutions for challenging productions of any size, in any situation. Recent projects include the live concert productions at the NCAA Final Four, the Re/Max Long Drive Challenge on ESPN, and for the first time in broadcasting history TNDV produced the 2014 Hat Trick of Country Music Award show red carpet specials, including the CMA Awards, the CMT Awards, and the ACM Awards. Please call 615-585-6528 or visit www.tndv.com for more information.