The difference between LOG (or Logarithmic) and RAW video tends to confuse many videographers. On first glance, they seem to be identical — but that’s not true. Each has its own place, depending on the kind of project being produced.

Yes, both RAW and LOG produce very flat video images that offer great flexibility for color grading. RAW preserves all the camera sensor’s information and passes it on untouched for post-production. Using a LOG profile preserves more of an image’s dynamic range and tonality, but bakes it into the video. Both can look very good, but they differ in how they impact the video workflow.

Most of today’s cameras have a single CCD or CMOS sensor. Nearly all of these sensors use a Bayer pattern array of millions of tiny cavities called photosites, or light collectors. These photosites hold light for a tiny instant of time before converting it to a digital signal that’s read by the camera’s processing circuitry.

The Bayer pattern looks like a checkerboard. Its purpose is to separate light into red, blue and green wavelengths. The key difference with RAW and LOG is that the conversion of the original video is not taking place in the camera, but in post-production software.

RAW takes data directly from the photosites and records it to video — completely unprocessed. Because this data is RAW, it is not viewable in any video monitor without a de-Bayer process.

Fast forward to modern cameras, which offer LOG footage. Whether digital cinema cameras, DSLR or mirrorless types, most later models offer LOG modes as a standard feature. When a camera operator shoots LOG, the image is flat and desaturated. This adds the flexibility of color grading in post.

LOG was invented by Kodak in the early 1990s with their Cineon film scanning system, which won an Academy Award for technology. Film is scanned into a LOG format that corresponds with the density of the original film. This maximized the amount of information from the film that could be stored in a video format. This information was in very low contrast and needed to be color corrected. 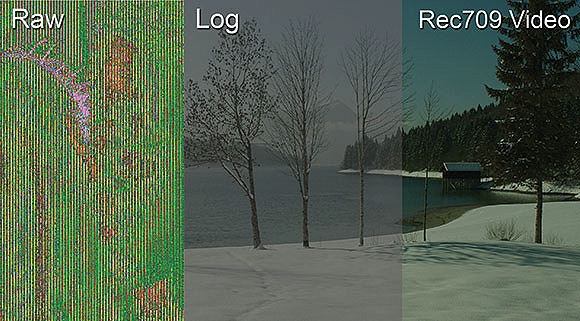 All camera manufacturers have taken the concept of LOG film scanning and applied it to their own camera sensors. When shooting in specific LOG modes — such as S-Log, Canon Log, LOG C, etc. — a LOG gamma curve is pulling the most information possible off of the camera’s sensor.

How does shooting in LOG differ from shooting RAW? LOG is a specific video format processed in the camera, unlike RAW, which is totally unprocessed. LOG footage can be viewed on an external monitor without conversion. And, because it’s a video format, certain components such as white balance and exposure are made part of the video.

LOG is much flatter than standard video images and captures more dynamic range. But the footage has to be manipulated in post-production in order to look normal. It appears washed out coming from the camera.

When to shoot LOG or RAW depends on the project. RAW has the advantage of being uncompressed data from the sensor without processing. You cannot view RAW data on a monitor while shooting and the file sizes are much larger.

On the other hand, LOG is a compressed video format and specific elements are included with the video while shooting. It does offer very flat footage with a lot of information in smaller file sizes that can be viewed real time on a monitor.

For the most critical projects, it is always best to shoot RAW because the editor has total control over the images in post. For typical projects — say a YouTube video — LOG is perfectly adequate. It is really a matter of the level of perfection desired in the video. 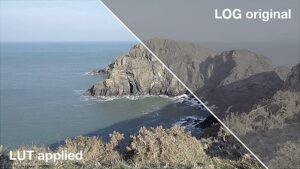 Both RAW and LOG achieve a flat image that is easy to color correct. RAW, though it offers precise control, is often demanding for non-professional video editors. RAW demands a skill set that many videographers don’t have.

Since RAW data is massive in size, editing it requires multiple gigabytes per minute of storage. Just saving these files alone will dramatically increase costs and backing them up will take longer times.

The situation is constantly improving. The decoding of many RAW formats — including Apple’s ProResRAW, Blackmagic RAW and REDCODE RAW — is now much faster than before. GPUs are also becoming faster and more powerful, and post-production software is integrating GPUs to make the process more efficient. 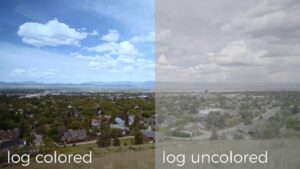 LOG video, in contrast, allows a videographer to go straight into editing after color correction. Once the image looks natural to the eye, then comes the color grading, which helps establish the mood of the video.

Because LOG video formats contain so much additional information than standard video, it is easier to experiment with the video and grade it more exactly without a major loss of quality.

Every video producer has different production requirements and standards for video quality. Both RAW and LOG offer excellent image quality. RAW has the most power, but LOG is more convenient. The choice is usually made on a project-by-project basis.