RAW video is the camera’s sensor data before any image processing. When shooting RAW, the camera does no processing. To view the footage, post-production is required.

Typically, in a single sensor camera, color is produced by filtering each pixel to produce either red, green or blue values. These values are the crude, unprocessed output of the video. Think of RAW video as a film negative, which can be processed a multitude of different ways.

When shooting video in a non-RAW format, the camera does all the processing automatically and bakes it into the finished video. It’s a bit like the pot-luck image developing we used to get on film sent a drug store. It might turn out well or it might not.

RAW offers the professional videographer control over the images in the edit room, just as still RAW images can be manipulated with an application like Photoshop. RAW video means all the data that hits the camera’s sensor is available for control in editing without a loss of image quality.

This image data can be endlessly tweaked to get the look desired. Exposure can be altered; white balance changed; frames can be sharpened; and images can be corrected for color, shadows and highlights. There is extra headroom to correct errors made during shooting. RAW allows the shaping of the look and feel of the video.

RAW can also be useful when shooting in questionable lighting situations, such as when there is mixed or very low available illumination. It can help balance color temperatures when moving between indoor and outdoor light.

Unlike video pre-processed in the camera, RAW files are lossless — always maintaining their original quality. There are no drops in resolution due to resizing

However, RAW data isn’t necessarily uncompressed. Sony’s F65 digital cinema camera has 3:1 and 6:1 compression choices in the F65RAW mode, while RED cameras in the REDCODE mode have compression options from 3:1 to 18:1.

On the other hand, ARRI’s ALEXA camera outputs uncompressed raw data, which can be recorded externally. This is the closest thing to a truly uncompressed signal. 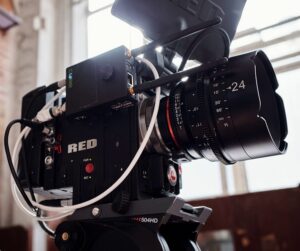 Apple has developed ProRes RAW, Blackmagic Design has BM RAW and Canon has RAW Light — all variations of RAW. A serious downside is that all of these versions of compressed RAW recording are not cross compatible. Each offers its own pluses and minuses. The correct user choice depends on personal preferences and the workflow of the project.

Video for serious, professional-quality production is nearly always recorded in a form of RAW for ultimate flexibility in post. However, with every shooting scenario, there are tradeoffs that sometimes preclude shooting RAW video.

A major consideration is file size. Generally, depending on a number of factors, RAW files can be between twice and six times larger than standard compressed video files. Each uncompressed frame is 5MB in size. At 30 frames per second, a raw HD video will need 5MBx30, or 150MB of storage space per second.

This means standard SD flash memory cards fill up with data very fast and larger capacity cards and storage are quite expensive. The cost of shooting RAW footage soars, especially on major projects. This storage level is not for casual video shooters.

When a camera does not shoot RAW, images are processed using the camera’s circuitry. Typically, the camera throws out what it considers unnecessary data to save on file size. This can lead to image artifacts, which can be expected in all compressed video. 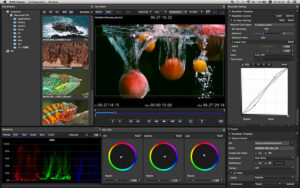 Obviously, not all video needs to be shot in RAW, especially when editing is not planned or desired. In fact, informal home video should not be shot in RAW, since the camera does a pretty good job of internally processing images. MPEG compression is fine for non-professional, personal videos.

Also, when speed is of the essence, RAW may not be the best choice. Run-and-gun news footage is an example — a situation where the race to air the video is more important than image quality or post-production. Also, unless a RAW workflow has been established — from high-capacity flash cards to post-production — it should be avoided. Many lower cost cameras can’t even handle RAW.

When intending to shoot RAW, make sure the camera is set-up correctly. It is a common problem when an accidental camera setting results in unintentionally processed footage when RAW was desired. For professional shooters, this error can make a huge difference in post. Always double check the RAW setting before beginning a shoot. This even includes iPhones, which have RAW settings.

There is an alternative choice that’s a compromise between RAW and compressed formats. It’s called log, or logarithmic footage. This is flat footage that contains more details of the scene within the image. Log footage is intended only for editing, just as RAW, but can save some storage space. The details of how to shoot log video is for another article.

For professionals wanting the best quality video and flexibility in post, shoot RAW. If you have plenty of video storage, plan to edit and always want to know your video can be used for any purpose, then RAW is the correct choice. For cat videos or home videos, forget RAW