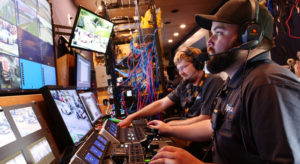 “I started Apex Broadcast when I noticed smaller racing car series being priced out of TV air time due to rising advertising costs. To work with these smaller series and get them on the air, I identified broadcast products that were of excellent quality but also reasonably priced. That’s when Blackmagic Design came into my workflow,” said Cambern.

Apex Broadcast recently installed the ATEM Constellation 8K in the large truck to help with the Blancpain GT World Challenge America. “Right off the bat, we are taking advantage of the 16 multiview capabilities which let us monitor multiple sources simultaneously in a single monitor,” noted Cambern.

One of the ATEM Constellation 8K’s main features that has proven to be beneficial for Apex Broadcast has been the 4 M/Es. “The 4 M/Es have given us tons of flexibility in terms of what we feed to different broadcast destinations during the races. In a given show, we’ll have our primary cut which is going to the television network. Then, often times, there is a screen cut that is sent to jumbos or to a TV nearby. When you’re in the middle of a show, the broadcast displayed on these various screens at the track and for viewers at home doesn’t change, but in between shows, the client might have a video loop or a still stored that they want up on the screen for a streamlined viewing experience,” Cambern explained.

“In between shows, we’re also testing graphics and checking focus on cameras. We feed these tests from a separate M/E, which allows us to simultaneously project the still or video loop on the screens while focusing on the M/E being used for testing. We also often have a US only stream which has to do with the networks and licensing agreements. What we feed to web has to be a little bit different than what we feed to the network, so we use a separate M/E to do that. Essentially, we’re doing a couple of sub cuts with these different M/Es.”

On the audio side, Apex Broadcast is relying on the switcher’s built in Fairlight audio mixer for complex live sound mixing. “With the ATEM Constellation 8K, we can EQ individual camera mics which is really handy,” added Cambern.

Each race for the Blancpain GT World Challenge America takes place at a different track, and in total Apex Broadcast will travel to seven different tracks with the large OB truck this season. From Tuesday to Thursday during a typical race week, Apex Broadcast sets up 30,000 feet of tactical fiber cables to position the gear around the track. On Friday, it sets up the URSA Broadcasts along with the rest of the gear.

Camera shading is done from the engineering desk with three ATEM Camera Control Panels. The video technician manages iris, white balance and color balance for 12 URSA Broadcasts from these panels. In addition to the camera’s SDI output, shading controls, audio communications, program return and tally are carried over fiber.

“Since auto racing is very dynamic, our technical director works from the ATEM 2 M/E Broadcast Panel, which integrates very nicely with the ATEM Constellation 8K. Its tactile control surface facilitates faster switching than the software control, and he’s able to manage DVE effects, transitions and macros from the surface, which is important in a complex show,” said Cambern.

“The SDI router is the heart of a production truck, and our 72×144 Broadcast Videohub has given us many years of reliable service. Just like the ATEM, the router can be controlled over IP, which makes it easy to control from anywhere in the truck. In addition, four HyperDeck Studios allow us to capture two copies each of the clean broadcast cut with no graphics as well as the dirty cut with graphics,” Cambern concluded.

Apex Broadcast will continue using Blackmagic Design on its upcoming 2019 Blancpain GT World Challenge America races and future live sporting events to deliver a premium experience for both clients and viewers at home.