For the NBC primetime celebrity game show That’s My Jam in the US from Universal Television Alternative Studios, famed television, and live event director Glenn Weiss and his long-time Steadicam operator Toré Livia from Jitacam decided on three AGITO modular remote dolly systems from Motion Impossible. Using two AGITO Sports with two cameras each, and one AGITO Trax, the production was able to meet one of the prime requirements of Universal.

The hour-long music and comedy variety game show, hosted by Jimmy Fallon, features teams of celebrities. In each episode, two teams of two celebrities compete in a series of music, dance, and trivia-based games and musical performances for a charity of their choice.

“The one thing Glenn told me before our initial discussion was that Universal was very specific about not having a lot of camera people near the audience due to Covid safety protocols,” said Livia, the VP of west coast operations in Los Angeles for Jitacam, who was responsible for the setup of the three AGITO systems as well as serving as Steadicam operator for the show. “There would need to be a 6-foot space between any camera operators, plus those working on the show and those in the audience.” 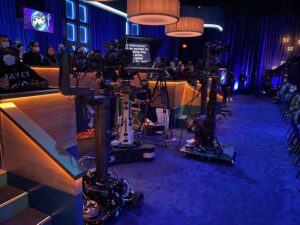 Livia had previously worked with Weiss, as well as having worked with all of the show’s producers and all of the talent on the show during his career.

“I’ve worked with Glenn on most shows that he has directed for almost 20 years. I’m one of his main Steadicam operators, and Glenn is helping me move towards directing. He also knows that I’m on top of the latest production equipment and that I am a part of Jitacam.”

“Glenn came to me and we set up a Zoom call to go over the camera plot of the show and to see if I might have any ideas he didn’t think about, especially with Universal’s 6-foot Covid safety requirements,” said Livia. “In the past, I had suggested the AGITO to Glenn for his shows, which he loved using. So, I suggested putting two cameras on one AGITO Sports house right, and the same house left, plus a single camera AGITO Trax behind the audience that would show the scale of the set with the audience in the foreground. The best part…all of the AGITO and camera operators would be sitting nowhere near the audience, with the AGITO pilots running wirelessly, and the camera operators hard-wired due to all the RF in the soundstage.” 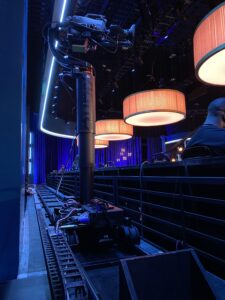 All five Sony HDC-4300 cameras were mounted on SHOTOVER G1 gyro-stabilized gimbals, with long ENG-style lenses for the smallest profile as to not block the audience’s view of the stage.

“For the two double-camera AGITOs, we used the tower as the main pedestal and at the top had a plate made as wide as the wheelbase, so that both cameras could be mounted on top of that,” said Livia. “The double cameras on the AGITO towers were always at the same heigh.t Having one high and one low wouldn’t have worked because if we did that, the lower camera would have been blocked by the audience sitting in the chairs, so both cameras needed to be higher up.”

With an AGITO maximum tower height of 6-feet, another 8-inch riser for the plate, plus the height of the G1, all four cameras were right at or above the talent’s eye line – all except for Blake Shelton, who stands 6-feet, 5-inches tall. Neither of the two AGITO Sports dollies would move during production–just provide coverage of the game, but were easily repositioned between games, during what would be a commercial break. The AGITO Trax behind the audience was in constant motion for over-the-shoulder audience shots.

In addition to the three AGITOs with five cameras, there was one manned center pedestal camera – the only person near the audience but at least 6-feet away and a remote-controlled Mat Towercam from Jitacam set next to it, which basically took the spot of a second center pedestal camera. Plus, there was a handheld camera on a tripod house left, with another house right. Additional miniature cameras were placed within the set of specific games the celebrities played.

“One of the nice things is that we got two days of setup and more rehearsal time than you would normally get on most shows,” said Livia. “That gave us the ability to massage the exact positions of the two AGITOs near the stage to exactly where they would need to be for each game.”

“Glenn was extremely happy,” said Livia. “He killed two birds with one stone: He got the coverage he wanted and didn’t have to use multiple pedestal cameras, whose operators would have come within 6-feet of an audience member. It was perfect with no complications.” 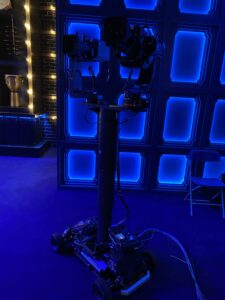 “When a production uses an AGITO, it’s because it gives them the flexibility to get the creative shots they desire,” said Rob Drewett, CEO and Co-Founder of Motion Impossible. “But when That’s My Jam uses three AGITOs with five cameras, we know that we’ve done a great job in creating the best remote dolly system possible to meet a wide range of production requirements.”

Of course, there’s always room for improvement. “Glenn and I talked about the next season to see if we could hide the AGITOs better so that the double-headed AGITOs don’t stick out as much. Even though they were in some shots, they’re still so much smaller than a regular studio camera with a box lens and an operator standing behind it, Livia concluded.”