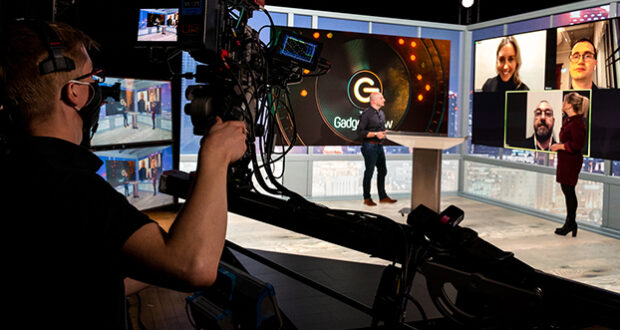 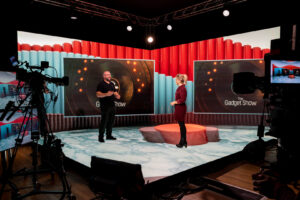 During UK Friday night primetime television, disguise showcased its award-winning xR technology on Channel 5’s The Gadget Show, highlighting how extended reality offers virtual production and performance in immersive real-time video environments unlike any other – empowering producers to deliver unforgettable experiences and allowing brands and artists to continue connecting with their audiences remotely.

Launched in 2004, The Gadget Show is one of the UK’s longest running shows, providing exclusive access to the latest technology trends and future innovations. Presenter Georgie Barrat was treated to an all-encompassing xR experience, taking in the disguise London HQ and filming a series of one-to-one interviews about the origins and ambitions of xR technology with disguise’s executive leadership team, including CSO Tom Rockhill and CTO Ed Plowman.

Getting the lowdown on xR from the disguise team, The Gadget Show took viewers through the disguise workflow, which provides a centralised system to control and deliver a virtual environment, that is visible both on physical screens on set and via fully virtual content in camera. The disguise engine coordinates camera tracking, real-time content rendering, presentation to physical displays (LED panels), performance capture, spatial and temporal reconstruction, composition and final output from a single environment.

The Gadget Show explored the ways that disguise continues to herald a new dawn of virtual production with these innovations. The demand for remote and virtual production following the cancellation of live events has seen a huge uptake of high profile customers making mixed reality mainstream. As a response, disguise has invested more resource into the development of its xR technology, enabling it to reach a level of maturity to provide endless options for productions with limited access to staging and crew.

The Gadget Show was also taken across town to experience a cross-location meeting on disguise Certified Solutions Provider White Light’s SmartStage at London’s Science Museum. Utilising multiple inputs from a Zoom call and an example of ‘teleporting’ in a guest to the stage, White Light Technical Solutions Director Andy Hook took The Gadget Show through the features that make xR truly unmeasurable. Hook said, “It was fantastic to see xR and our SmartStage solution getting such a great reaction from mainstream media. It was the natural choice for us to work with disguise when we started our xR journey more than three years ago and it’s amazing to see the tools we’ve helped them develop since then being used across a wide range of industries.”

Over 80 xR stages have been built in 30+ countries with many more planned, as the industry starts to recognise the growing importance of immersive yet remote real-time production. These stages have been instrumental in spearheading xR across a variety of applications, from broadcast events like the 2020 MTV Video Music Awards and America’s Got Talent,  live music performances from artists like Billie Eilish, Katy Perry and Alicia Keys, corporate presentations from SAP and Lenovo, and on-set virtual production for some of the world’s leading film production  companies.

The disguise team laid out its affirmations of ambitions for xR technology with The Gadget Show. Ed Plowman CTO said, “Our goal is to further integrate the virtual and physical side of production workflows, so the two elements are largely seamless to the production team. Our vision for the future for xR is to increase the creative freedom of virtual production to the same level of physical production, handing more control to the Director of Photography and enabling them to realise their vision for a shot.”

“In an unforgettable year when the world had no choice but to find virtual solutions due to the impact of the pandemic, disguise xR continues to go from strength to strength, powering many virtual events, performances and productions, in entertainment and corporate settings across the globe. We were thrilled to host The Gadget Show at our London base and at White Light’s SmartStage, providing the nation with a holistic view of how xR technology is changing the production workflow, and is now becoming accessible to all,” says disguise CSO, Tom Rockhill.

You can watch the episode on the Gadget Show’s YouTube Channel here.

Book a demo or speak to our team using this link.

disguise xR has already powered immersive real-time productions for music artists such as Katy Perry and the Black Eyed Peas, enterprise businesses like SAP, educational institutions like the University of Michigan, broadcast TV shows like MTV Video Music Awards and America’s Got Talent, commercial brands like Asahi and Under Armour and many other virtual experiences in more than 20 countries.